skip to main | skip to sidebar

Dave is a renaissance man.
http://pitchfork.com/tv/#/musicvideo/3444-tortoise-prepare-your-coffin-thrill-jockey
Posted by LoveLikeFire at 5:31 AM No comments:

What an amazing way to end an amazing two weeks in England. The Dot to Dot Festival was held in Bristol and Nottingham, two beautifully romantic towns a few hours away from London. In Bristol, we played on a boat overlooking the River Seven. The crowd was electric, I broke a string for the first time ever, but didn't really matter much, it was so packed in there I could barely see anyone past the first row. We got meal tickets for these delicious beef pies and free beers, and we met up with our friends in Gran Ronde, nothing more you could ask for really.
In Nottingham, we played in an amazing venue called the Bodega, sound was stellar, and I felt like a strong connection with people so much that I lost myself in William. Ha. We ran into our lovely friends The Pains and Wintersleep and had whippy cones with Mick and Amul after the show. Seriously, what more could you ask for? Can't believe it's already over and tomorrow we head back. Stocking up on Crunchy bars and getting on that flight with fond memories of our first UK tour. xo ann
Posted by LoveLikeFire at 3:17 PM 2 comments:

We met up with our sweet, sweet labelmates after the gig and drove back to Twickenham for our intimate little afterparty. Two frozen pizzas, five jack daniels, and one toffee bar later, we were watching a screaming cat on youtube in one corner and singing along to Martin and Pat's rendition of the Rat by the Walkmen in another. Can you imagine this, wish I had video footage of it.

The photoshoot was quite fun, it's always a new adventure, the Regent Park feels very royal maybe 'cause it's owned by the Queen but there was definitely a prim and proper air to the grounds. We also took some shots in a cute 50s esque laundromat, bright yellow washers and nice typeface.

The turnout at Club 229 was cozy but we had a fan train in from Scotland for the show who was also at our Vivian Girls show which made me feel pretty greatful. All the other bands were super nice but, holy, was the venue loud, my eardrums are sore from this.

Ready for sleep.
Posted by LoveLikeFire at 6:22 PM No comments:

From Twickenham- a mad recap

Wow. Every day has been racing by here, so I am going to recap some cool moments from our trip thus far. We'll add all our photos to the lovelikefire flickr page too in the next couple days, there are so many of them, it's going to be tough wittling them down.

Camden-
Last night we played at the famous Barfly, so many amazing bands have played there. Camden, where the Barfly is located, is a bit like Haight and Ashbury in San Francisco with tons of shops, places to eat, and definitely touristy. I found a beautiful dress for 5 pounds and we ate fresh donuts and coffee from one of the booths. There is also this area called the Stables with loads of vintage stores. Earlier during the day one of the lovely girls, Sema, at our pr firm escorted us to a couple of interviews before our gig, and we got to hang out in a cool little park near Russell Square.

Music Video Shoot-
On Sunday, we spent 24 hours making a music video for Boredom in the New Forest. Jacob Perlmutter, the director, reminds of Max Fisher from Rushmore. He is a bright young fellow, charming and incredibly talented. He greeted us that morning at 7am and led us into this field of bluebell flowers where they'd hung purple paper lanterns everywhere that lit up, it was quite surreal and so beautiful. We spent the entire day there shooting loads of scenes over 24 hours and by the end we were all quite delirious from fatigue. We had a scene with a white horse named Twitchy who kept giving us the stink eye because somehow he knew he was roped into doing this scene where he had to trot across the forest for us several times! Sorry Twitchy. There was also one shot where they had a photcopy machine in the middle of the woods and neon lights flashing through, the bugs loved this and our faces were right inside the copy machine for the shots. I alone have about 15 bites over my face and legs. The crew on the shoot were great, they worked round the clock past the 24 hours we were there. I hope they are catching up on their sleep now.

The Great Escape in Brighton -
This is way cooler than SXSW, there is a concentration of bands from all over the UK and the States that play in this beautiful town by the sea, just as you could imagine what that might be like. A tacky pier with a dreamy carousel, funnel cakes, and quaint little cobblestone streets throughout the town that fan out into the main street. We saw probably 15 bands over the course of 3 days. Hatcham Social was our favourite collectively. We had our first full english breakfast in Brighton too which consists of fried egg, bacon, sausage, baked beans, tomatoe, and white toast. The English equivalent to a Denny's Grand Slam.

I will write some more tonight when I get back from our show at Club 229, off to a photo shoot at the moment near the London Zoo!
Posted by LoveLikeFire at 3:12 AM No comments:

It was just so sunny and beautiful again today. We thought, well this is a lot like San Francisco except that it's much sunnier and warmer here, that doesn't seem right somehow? We drove around collecting our acoustic guitars for the Fly set tomorrow, thanks to James Yuill and Alex from The More Assured for letting us collect them. Not sure if it was the sun beating down or the jet lag but lethargy sleepiness kicked in full force. Mick kindly drove us everywhere today, including Portobello Road in Notting Hill where we got to see Rough Trade records and our vinyl there! We also found Sleepy Sun, Wooden Shjips, and The Papercuts in the store, so many SF bands represented here in the UK, so cool! We drove back to Mick's company and rehearsed our acoustic set and had fun taking photos on his forklift, while Dave tuned up the new Heist drumkit. Fun!! Yes, it doesn't take much for us to discover a good time!
For dinner tonight:
Fish and Chips (one whole fried piece of cod!)- Dave
Bangers n Mash (tender sausage deliciousness)- Ann
Chicken Sandwhich (cajun flavor explosion) - Eric
Ribs (no need to explain this one) - Marty
And if that wasn't filling enough, we had Sticky Toffee and Apple Crumble for dessert.
Who said there wasn't good eats in the UK again? Tomorrow we are playing at the Social, and will be seeing some SF friends there, can we hope for a third day of London sunshine? TBC....
Posted by LoveLikeFire at 3:38 PM No comments:

Day One in London - We safely landed and took a power nap before heading over to the venue, an old 50s charm british pub. The brits know their pubs, apple cider was amazing and they even had cupcakes there. Amusement Parks On Fire were fantastic, nice guys and great music. Our new gear worked so well that I am personally tempted to switch permanently to an AC-15. Got the ol' bruise on my hand from the tambourine again, sweaty and cozy stage. It was a really fun show, jet lag wasn't even a factor, it hasn't hit yet in fact, still up at 2a.m. having some whiskey and talking about music.
Prices are surprisingly not as high for food as I thought. An egg sandwhich at Marks & Spencer was only 1 pound which is about $1.50. Had our first taste of marmite, half the band liked it, half band were open minded about it. We all agreed it would make for a great condiment along with some other delicious condiments. Mick's house is beautiful, picture perfect, along the river, I would like to set up a couple of beach blankets and bring tea and a good book and spend an afternoon on his lawn.
Day one was pretty lovely here.
Posted by LoveLikeFire at 5:53 PM 1 comment: 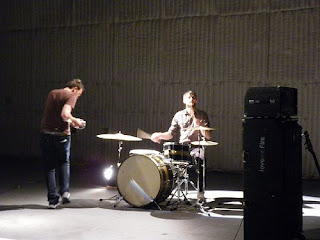 Last week we shot a music video for Stand In Your Shoes. We were in a big padded room, wearing helmets...I know right?  The same directors Ed Skudder and Zack Keller who did William, they are wonderful and we're very much looking forward to what's in store.  We drove down to Santa Monica to shoot, land of abundance and fancy cars.  Afterwards, Ed and Zack took us to a sandwhich spot, forget what it's called, but they had this monster called the Godmother, too much meat, sauce, spread, too much goodness.
Today is rainy, drizzly, cold. Perfect weather for Here We Go Magic.  Tunnelvision is great with hot cocoa btw.   www.myspace.com/herewegomagic
Posted by LoveLikeFire at 12:14 PM No comments: